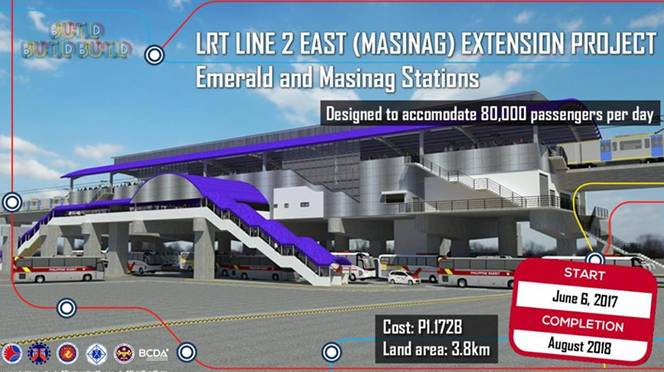 It entails constructing a 4 km extension of the LRT-2 System from Santolan in Pasig City to Masinag in Antipolo, Rizal.

Two additional stations – Emerald, in front of Robinsons Metro East and Sta. Lucia in Cainta, and Masinag, before the Masinag Junction in Antipolo City – will also be constructed.

“Travel time from Recto to Masinag will soon be reduced to 40 minutes compared with the usual travel of up to 3 hours in the same route by bus or jeepneys,” the Department of Transportation (DOTr) said in an emailed statement Tuesday.

D.M. Consunji Inc. (DMCI), a wholly-owned subsidiary of DMCI Holdings Inc., bagged the contract for the two stations. Construction is set to start on June 6, 2017.

To be completed in August 2018, the project is envisioned to accommodate 80,000 passengers more per day in the first five years of operation. That is on top of the daily ridership of 240,000 on average.

“It will be a timely addition to have both new stations in the LRT Line 2 as we acknowledge the need for greater accessibility of passengers coming from the eastern side of Metro Manila, extending to key areas of Antipolo and its nearby cities,” Tugade said.

“The completion of the LRT Line 2 East Extension Project is part of the fulfillment of the government’s promise to ease traffic congestion by extending the service of the LRT Line 2 System to the eastern part of Metro Manila,” Berroya noted.