A6-storey building located along Marcos Highway, bounded by the cities of Pasig, Cainta and Marikina. Strategically located as a lay-by of the upcoming LRT 2 extension, and has an interconnecting bridge to Sta. Lucia East Grand Mall. 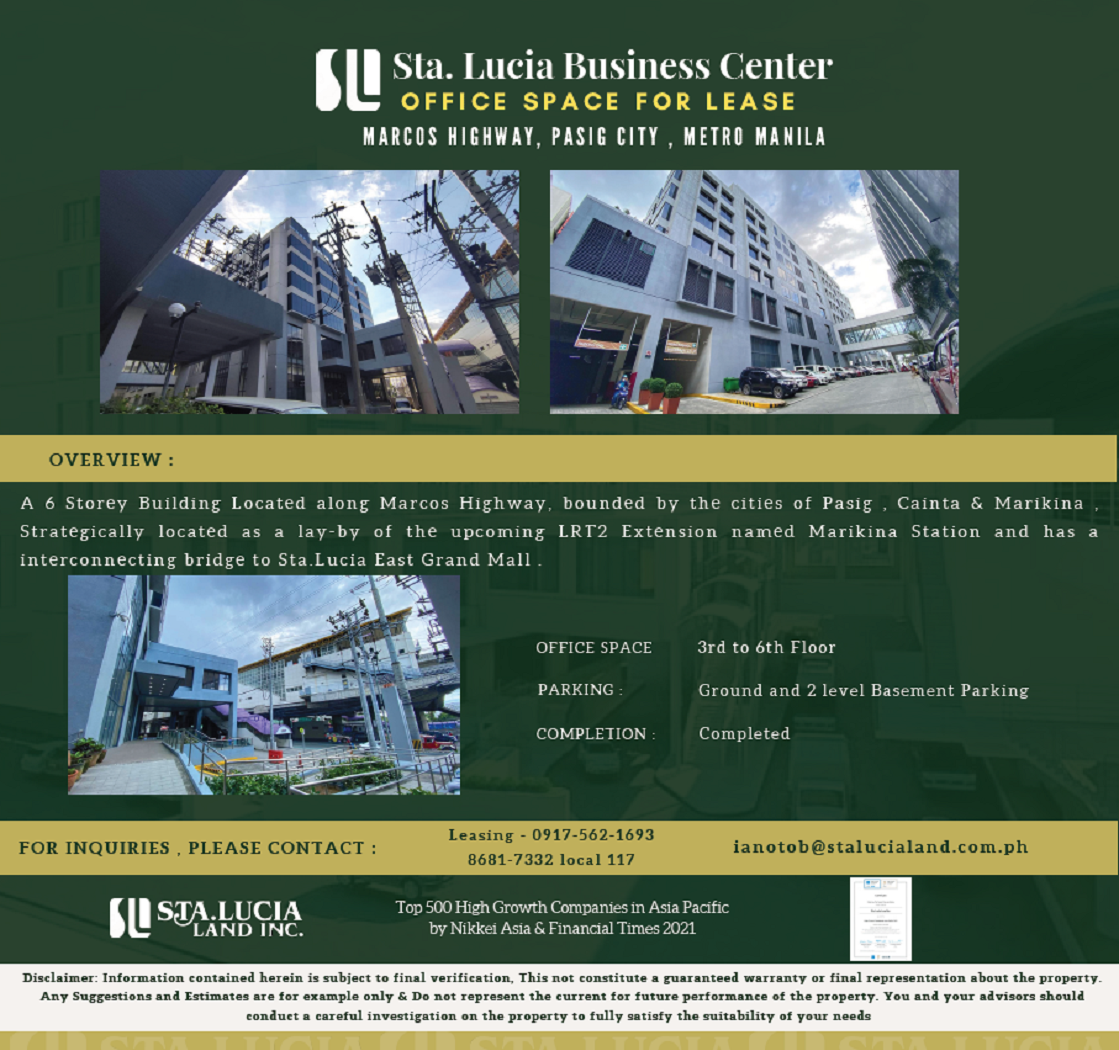 East on the rise

The timing couldn’t have been better for Sta. Lucia Land Inc. as it takes an aggressive, ambitious stab at creating what could be the first central business district in the eastern side of the metro.

And it has all the reasons to believe that it can do so.

The eastern side of Metro Manila—particularly the stretch of Marcos Highway that covers portions of Marikina, Pasig, Cainta, and Antipolo—has seen an increasingly brisk economic activity over the past two decades.

One proof would be the four malls that have sprung up along that main thoroughfare alone, while a new one is currently being constructed—clearly showing the rising purchasing power of consumers in the area.

The Sta. Lucia East Grand Mall, located at the corner of Felix Ave. and Marcos Highway, also had its own transformation, from being a one-building mall in 1991 to what is now a sprawling shopping complex with residential towers.

Soon enough, fresh office spaces will be made available within that same complex as Sta. Lucia makes its initial foray into the office property market.

In an interview, Sta. Lucia executive vice president and chief financial officer David M. Dela Cruz bared these plans, as he opined that now is the best time for them to go into offices, not only because the company is able to build its financial muscle, but also because of the economic growth in that area.

“That area in the east is so prosperous and developed now. You wouldn’t be putting up malls there if there’s no demand. In our mall alone, there’s always a lot of people and we are experiencing a high occupancy rate despite the entry of other bigger players in the mall industry,” Dela Cruz explained.

“That area in the east is gaining traction and attracting a lot of retailers and hopefully, offices as well. Infrastructure projects like the LRT 2 extension can help. The population there has been growing and the incomes of residents within the area and from nearby communities are also growing proportionately,” he added.

As for Sta. Lucia, Dela Cruz pointed out that the company now has better access to capital, thus enabling them to enter into the higher capital intensive projects such as office spaces.

“As a conscious effort by the board and the management, we want to enter (into this segment) this year. We already have one under construction which we call the Sta. Lucia Business Center,” he noted.

“This is our first venture into offices because before, almost all of our projects are residential. Now, we want to complement the communities with more commercial establishments and office spaces,” he added.

The proposed six-storey Sta. Lucia Business Center will be located along Marcos Highway and will be connected to the upcoming LRT-2 extension project.

The first two floors would be dedicated for retail shops while the third to sixth floor will be leased out as offices. Each floor will have approximately 2,500 sqm of leasable office space, or a total of over 10,000 sqm.

According to Sta. Lucia, it is currently in the process of having this building accredited by the Philippine Economic Zone Authority, which means that upon approval, the lessees will benefit from the different fiscal and non fiscal incentives granted by this government agency.

The current target was to have the Sta. Lucia Business Center ready for fit out by the second quarter of 2018.

By then, Sta. Lucia is expecting to have attracted occupiers and tenants which include business process outsourcing companies, Dela Cruz said.

“Cainta is not a business district. But there is a growing number of businesses here and if they want, we can house them in our building,” Dela Cruz said.

“We want to develop a hub in Cainta. Eventually, we would also want a hotel there. We need to create our own community in that area with our commercial and leisure establishments, and office spaces to complement our residential structures

Dela Cruz believes that it remains profitable to enter the office property market given bullish expectations of a sustained economic growth.

Today, bulk of the available office spaces are located within the traditional CBDs such as Makati, Ortigas and Fort Bonifacio. But there has been increasing efforts to spread out the growth to more areas where there is adequate infrastructure and highly skilled talent pool.

“We believe that it is strategic to put up our first office in Cainta to the extent that there’s an existing complementary development there—namely the mall complex and residental towers. We don’t know if it will be a successful CBD, but we want to try as it will be the only hub in its area which we believe, holds a lot of talent that BPOs and other companies can tap,” Dela Cruz concluded.