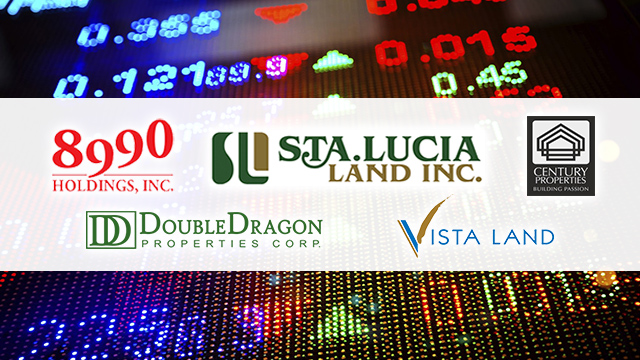 It has been a roller coaster ride for the Philippine stock market so far.

The PSE Index started the year on a strong note, gaining as much as 700 points to reach a year-high record of 8,213 only to lose it all towards the end of the first quarter. Although the market recovered immediately, it has been struggling to break the 8,000-level resistance. Recent fears of intensifying trade wars between the US and China have sent the PSE Index back to where it began in January. The PSE Index has so far made year-to-date gain of 3.7 percent, down from a high of 10 percent at the start of the year. Despite the dismal performance of the PSE Index, real estate companies have been outperforming the market with the Property Index gaining 15 percent so far. Last year, earnings of property companies in the PSE grew by a median of 17 percent, higher than the 9.8 percent growth registered in 2017. With falling interest rates, lower inflation and aggressive infrastructure projects by the government driving the growth of the property sector, earnings should further grow this year. Despite the strong performance of property stocks, the median Price-to-Earnings (P/E) multiple still looks attractive at only 11x, far lower than the market average of 17x. What are the best performing property stocks so far? How promising are these companies in terms of growth? Are they still worth buying at this point?

Here are the top five property stocks this 2Q19 and how you can profit from them:

8990 Holdings (PSE:HOUSE) is the leading mass housing developer in the country with over 58,000 completed housing projects under the Deca Homes brand. Net earnings of the company have been growing by an average of 19 percent per year since 2012 from Php1.7 billion to Php4.1 billion in 2017 on the back of strong sales growth. Last year, HOUSE reported that its net income grew by 13 percent from Php4.2 billion in 2017 to Php4.7 billion on a 14.8 percent growth in revenues of Php11.7 billion. This year, HOUSE is expecting its total sales to grow by 17 percent to Php13.5 billion. With an average net profit margin of 40 percent, the increase in sales translates to a 21-percent growth in net income of Php5.2 billion. Despite the huge increase in share price this year, HOUSE is only trading at 16x forward P/E multiple. Prospects of higher earnings growth should drive the stock to trade at higher P/E multiples.

Sta Lucia Land (PSE:SLI) is the leading developer of residential communities in the country with over 10,000 hectares of completed land development in the last 45 years.

The revenues of SLI which mainly came from sale of real estate properties have grown more than five times in 10 years from Php603 million in 2008 to Php3.7 billion in 2017, with an average growth rate of 20 percent per year.

Last year, SLI reported that its net income grew by 30 percent to Php1.1 billion from Php817 million in 2017 on the strength of a 15-percent growth in real estate sales.

This year, SLI is planning to raise Php5 billion capital via follow-on offering to boost its land bank holdings for future growth. The government’s massive infrastructure projects have raised the market value of its real estate inventory, which comprises half of its total assets.

Although share price has largely risen by more than 50 percent, SLI is still trading at a huge discount to its net asset value of Php3.90 per share. Further increase in land values and growth in earnings should support share price appreciation by at least another 50 percent in the medium term.

Century Properties Group (PSE:CPG) is one of the leading real estate companies in the Philippines engaged in development and sale of mid-and high-rise condominiums; leasing of retail and office space and property management in the last 30 years. Among the notable projects that the company has completed in the past are Gramercy Residences, Knightsbridge Residences, South of Central, SOHO Central, Trump Tower, and Century City Mall. Revenues of CPG has been growing by an average of 24 percent per year for the last eight years since 2009 from Php1.1 billion to Php6.7 billion in 2017. However, net income growth of the company has been inconsistent at an average of negative one percent. Earnings have been on the decline after it peaked at Php2.2 billion in 2014 due to lower revenues and rising interest expenses. Last year, CPG reported it was able to turnaround its revenues to grow by 59 percent to Php10.7 billion, which lifted its earnings to improve by 56 percent to Php985 million. While this could be the reason why the stock has rallied strongly lately in the market, it still remains to be seen whether management can sustain its earnings recovery this year. This is because despite the increase in net income last year, CPG registered huge operating cash outflows of Php2.2 billion, weakening the quality of its earnings.

DoubleDragon Properties (PSE: DD) has slowly transitioned its business model from a property development business to a recurring revenue-based company over the last two years. Last year, DD reported that its rental income grew by over 170 percent to Php2.5 billion from Php909 million, while its hotel revenues increased by 34 percent to Php533 million from Php397 million the previous year. The increase in recurring revenues has helped increase DD’s net income to grow by almost three times from Php1.6 billion in 2017 to Php4.6 billion. For the first three months of the year, DD reported that its total recurring revenues, which now comprise 31 percent of total revenues, grew by 45 percent to Php770 million. With over 50 percent completion of its target 1.2 million square meters of leasable spaces by 2020, DD expects to achieve 800,000 square meters or 67 percent by the end of the year. DD’s recurring revenues and earnings should further grow this year with 100 percent leased out of its first five office towers at DD Meridian Park, and the recent acquisition of new tenant leases for its Citymalls worth Php79.4 billion. The emerging growth in rental income from its leasing business and DD’s plan for a possible offering of its Real Estate Investment Trust (REIT) should support stock price’s long-term appreciation.

Vista Land (PSE: VLL) is one of the leading integrated property developers and the largest homebuilder in the country. The company provides a wide range of housing products to its customers across all income segments through its business units, Brittany, Crown Asia, Camella Homes, Communities Philippines, and Vista Residences. VLL’s revenues have been growing by an average annual rate of 14 percent for the last 10 years from Php9.4 billion in 2007 to Php34.8 billion in 2017. The growth in revenues enabled VLL to increase its net earnings base by an annual growth of 10 percent to Php8.8 billion in 2017 from Php3.5 billion in 2007. Last year, net income of VLL grew by 16 percent to Php10.5 billion from Php9 billion in 2017 on strong revenue growth, which increased by 15.5 percent to Php40 billion. This year, VLL reported that its net income for the first quarter also increased by 12.2 percent to Php2.9 billion on the strength of 13.5 percent growth in revenues of Php11.4 billion. With a positive earnings growth outlook supported by strong operating cash flows, current share price of VLL at Php7.20 per share should continue to go up as the stock is relatively underpriced at only 9x Price-to-Earnings (P/E) multiple compared to the industry median of 11x P/E.